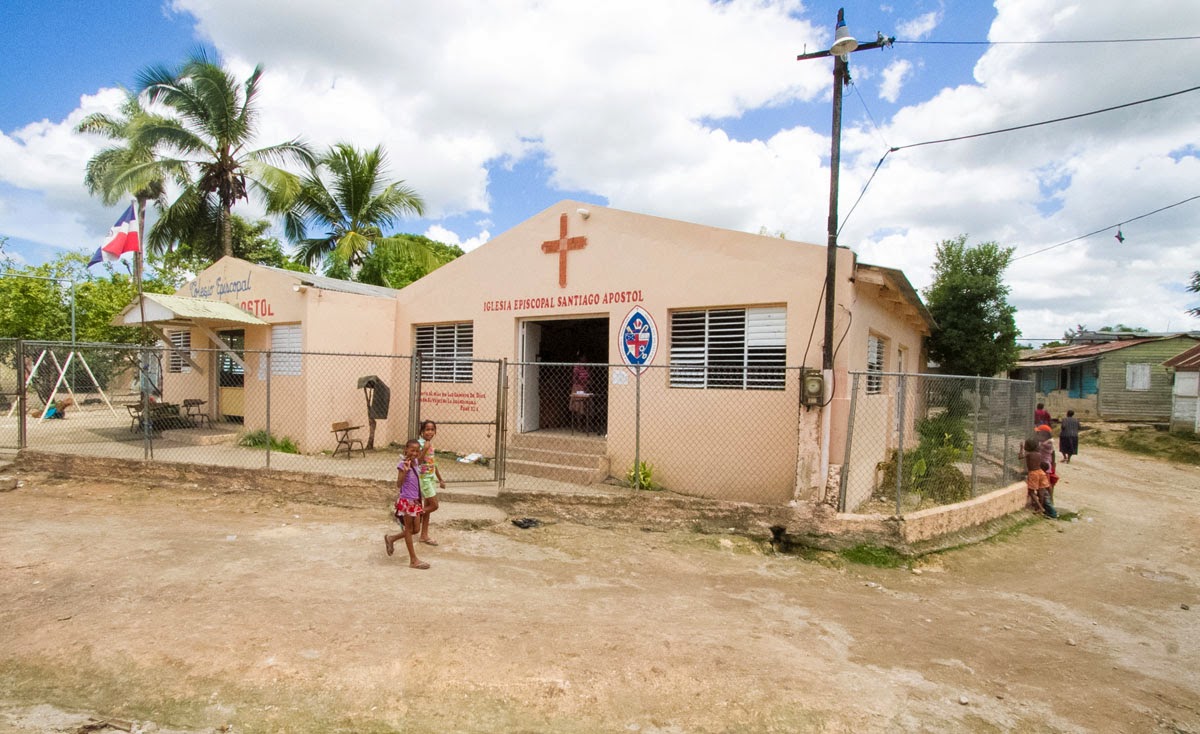 The Santiago Apostol Episcopal school and church in the village of Angelina. Click this image to see more photographs from the work of this mission team.

An album of photographs from the work of this team on October 4, 2013, is available here.

From October 4-8, 2013, mission team members from several locations within the Diocese of South Carolina were assisted by seven participants from Massachusetts in providing five days of medical clinics in two locations, Angelina and Los Conucos, located on the outskirts of San Pedro de Macorís, a large city east of the capital of Santo Domingo. Padre Félix Encarnación is the priest for the churches in both locations. As in previous years, the team was based in the Kellogg Center, a large residential conference center operated by the Episcopal Diocese of the Dominican Republic near the waterfront in San Pedro de Macorís. The Kellogg Center provided air-conditioned bedrooms and meeting rooms for the team, as well as breakfast and supper meals. The team members packed sandwiches and other lunch supplies to eat on-site each day.

The team chartered a city bus for transportation each day to and from the village of Angelina. The Kellogg Center is in the background of this photograph. Click this image to see more photographs from the work of this mission team.

Members from the Cathedral of St. Luke and St. Paul and St. Matthews, Darlington, SC, have been working in the Angelina community since March of 2007. The first medical clinic was held the following spring and a significant number of patients had chronic hypertension and/or diabetes. One of the local government physicians approved of our plan to provide these patients with medicines year round, provided they are followed up locally. A small medical team visits the community every spring and in recent years, a larger diocesan team has also held clinics in a separate site. We have had participation from churches in Darlington, Bluffton, Myrtle Beach, Beaufort, and several Charleston churches. 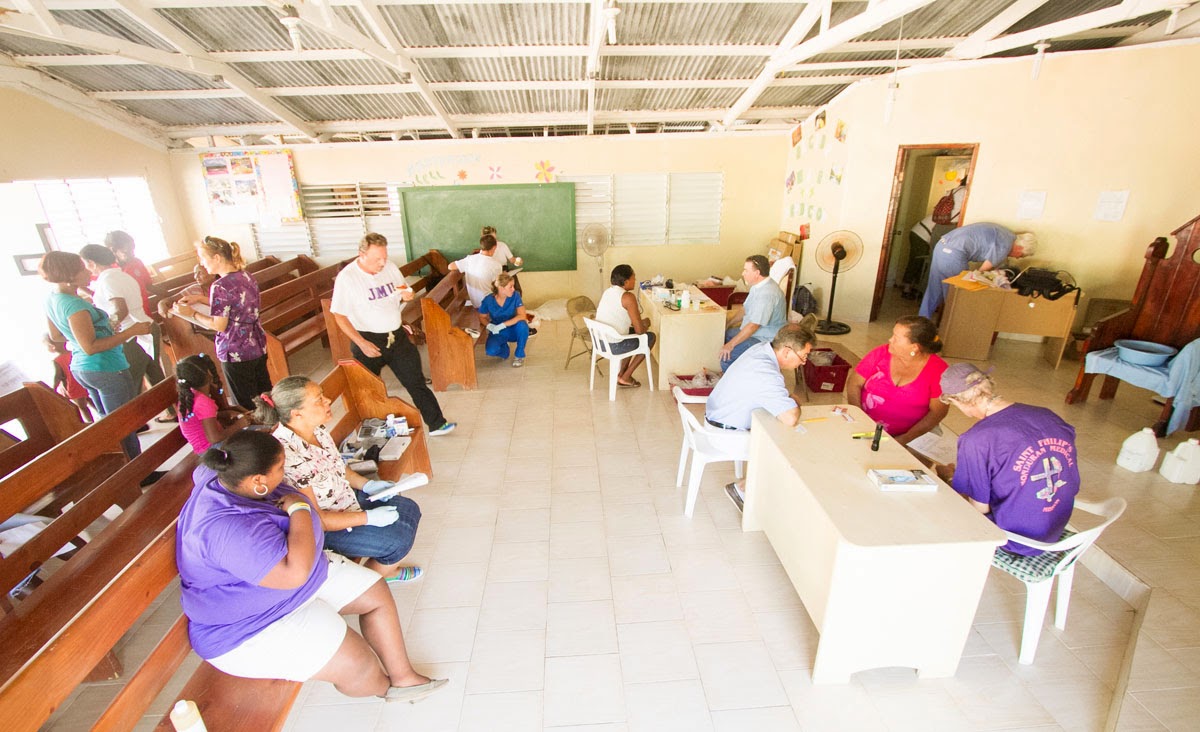 The interior of the Santiago Apostol church in Angelina with the medical clinic in progress. Click this image to see more photographs from the work of this mission team.

We have held clinics twice a year since the fall of 2008, and now have ongoing clinic records of more than 150 people in Angelina, many of whom we have now seen eleven times in the last six years. We have provided glucometers and testing strips for several patients since the local clinic has no means of checking blood glucose levels. Doctora Miriam Guerra, the local government physician, receives copies of our clinical records and often works with us when she is available. 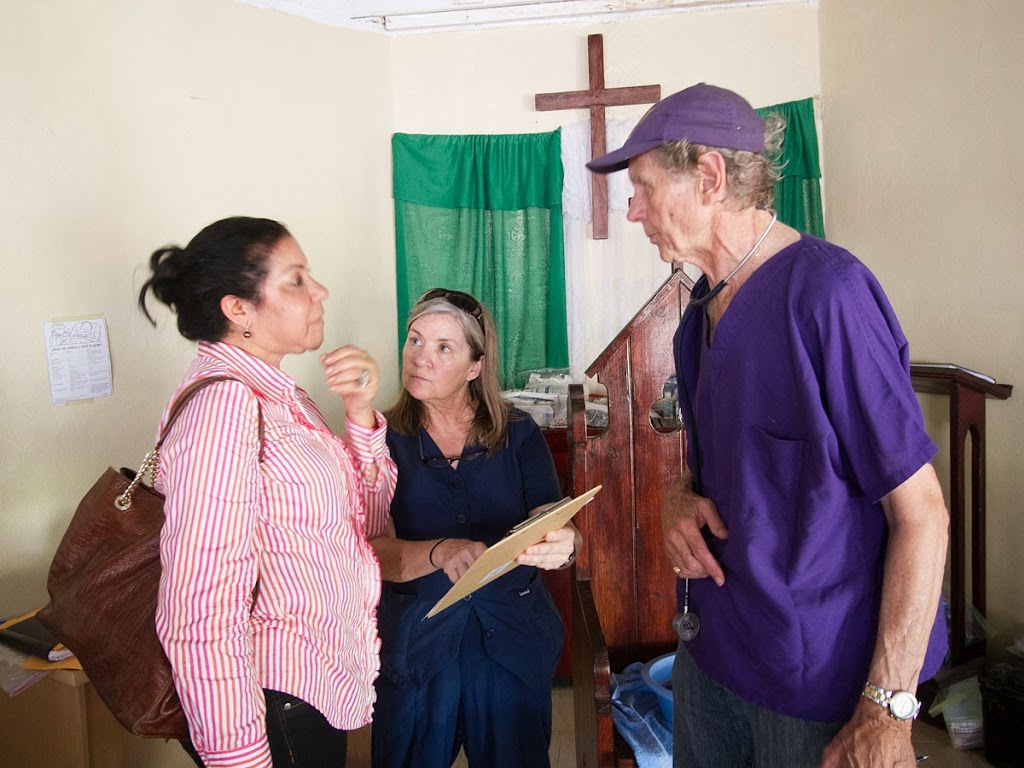 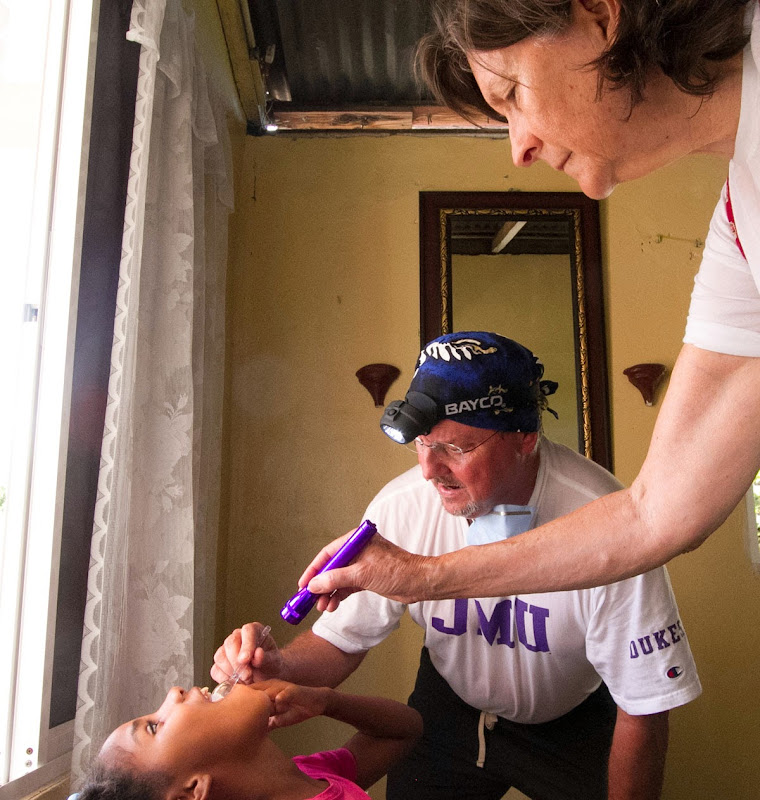 The dental clinic was held in a house across the street from the church. Dr. Pete Smith, DMD, was assisted by Susan VanSickle‬. Click this image to see more photographs from the work of this mission team. 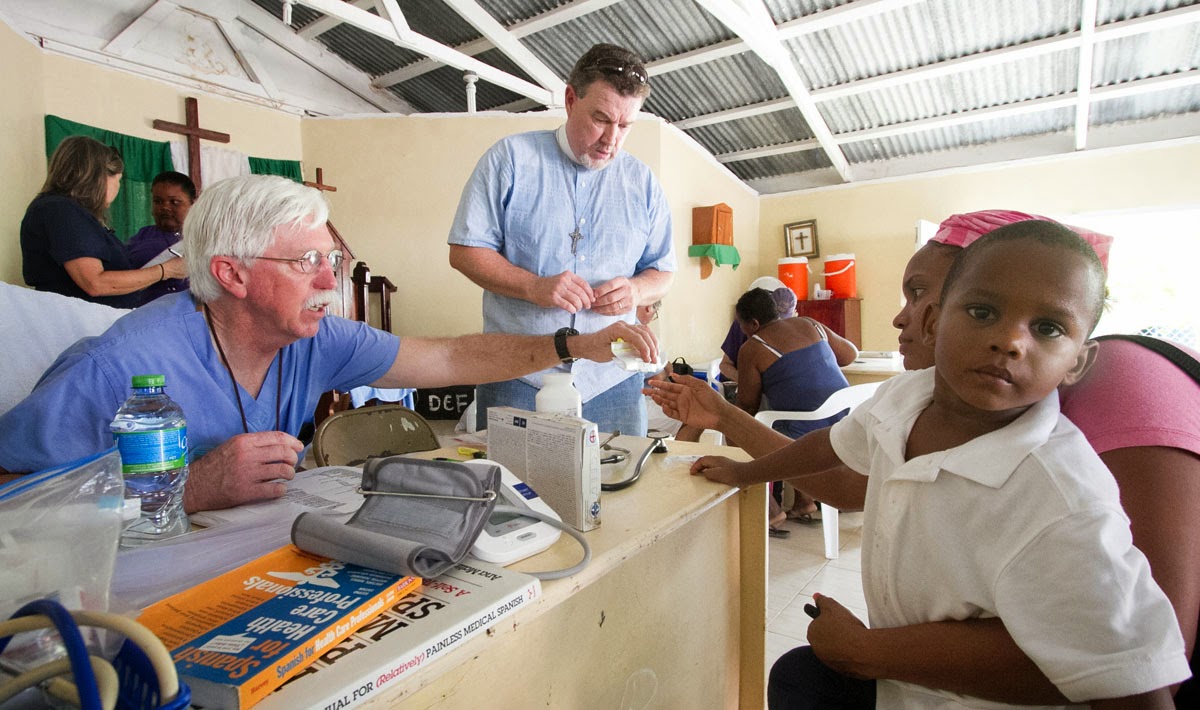 At one of the two medical examination and consultation stations, Dr. Howard Holl, MD, was assisted by the Rev. Mark Cooke. Click this image to see more photographs from the work of this mission team. 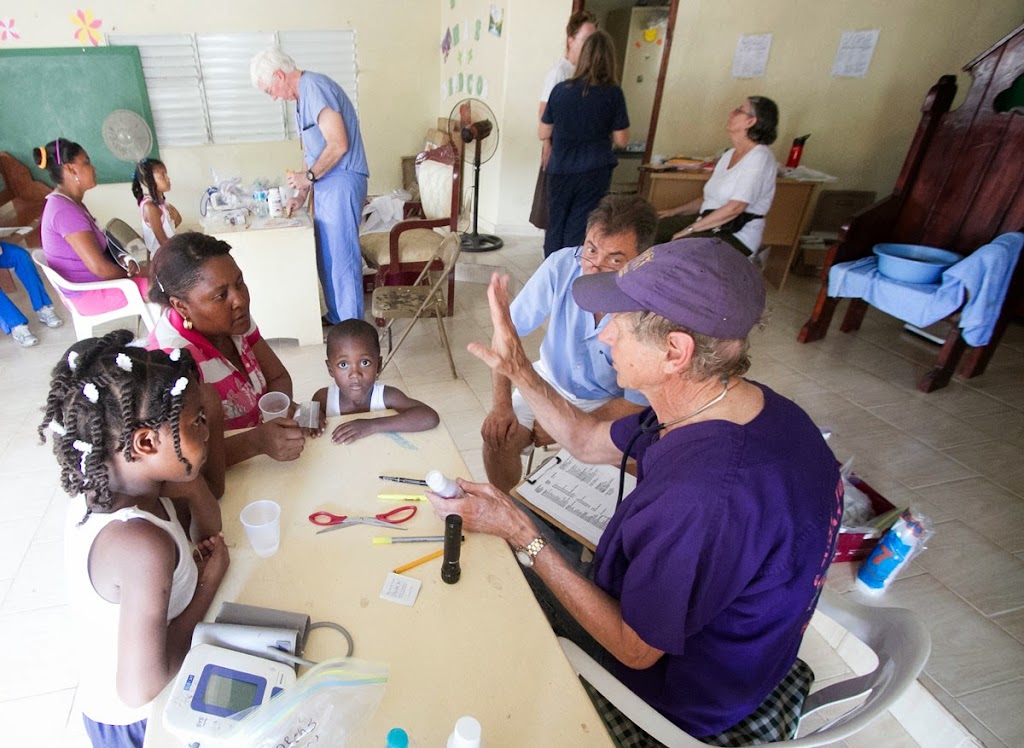 At the other medical examination and consultation station, Dr. John Dubois, MD, was assisted by Francesco Insolia. Click this image to see more photographs from the work of this mission team.

This year, our second clinical site was held in a newly constructed Episcopal church in Los Conucos, which is primarily a Haitian community. We were blessed with four team members from Trinity Episcopal Church in Lenox, Massachusetts, one of whom is a retired French teacher who could communicate with the French/Creole speaking community. They also provided us with a physician, Dr. John Dubois, who led many missions to Honduras and Panama, and also sent a retired Spanish teacher. Trinity also provided a generous donation for medications. We also had our faithful Roman Catholic team members from Boston who have helped us many times.

Our most rewarding “success story” this year was with our long-term, noncompliant patient, “Hector.” We’ve seen him almost every trip since March, 2009. His blood pressure is always 220-240/130-140. He comes in with most of his medicines still in the bottle that we gave on the previous visit. Finally, in April of this year, we applauded when his blood pressure was in the normal range. He had finally started taking his medicine and this past October, he was still compliant and his blood pressure was nearly normal. We also take care of his elderly mother, who has also has hypertension (we make “house calls” since she has a bad hip) and his Hector’s sister, Osirema, who has diabetes and hypertension. Osirema’s 24 year old son had a severe closed head injury 6 years ago when his motorcycle had a head on collision with a local bus (“gua gua”) so we try to bring his anti-seizure medicines down when we come. He was in a coma for six months and has come a long way but has some deficits and is followed by a neurologist. 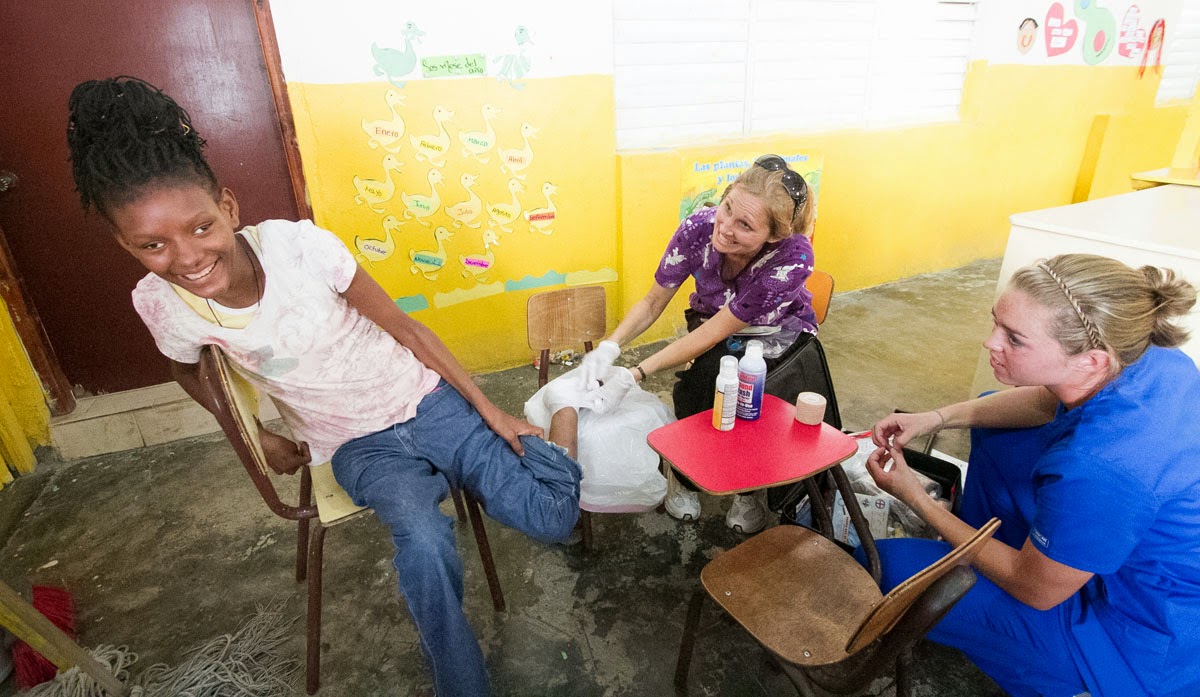 In center: Jane Teal, RN, assisted by Lauren Tomlinson, set up a wound care clinic for patients with diabetes and other conditions. Click this image to see more photographs from the work of this mission team.

Most recently, a 23 year old young man was sent to us again by Doctora Miriam because she has no means of checking blood glucose levels in her clinic. We have seen him seven times and each time, his blood glucose level has been over 300, sometimes even 400. Different oral medicines have been tried. We told Doctora Miriam that we would pay for him to be on the insulin program, would provide his testing supplies, and gave his mother a glucometer and test strips. We taught her how to use it and sent money to the local priest so that he would be able to buy the insulin. Wilton was reluctant to take insulin but understands the importance of maintaining normal blood glucose levels and hopefully will be compliant.

We would like to thank everyone for their prayers and support. Our next medical mission is tentatively scheduled for early April, 2014. We will be looking for a pharmacist and a primary health care provider, preferably a physician experienced in the management of hypertension and diabetes. Contact Joy Holl for more information <joycu76@hotmail.com>.

Meeting us from Boston MA, our faithful Roman Catholic friends whom we met in Panama through the Dubois,  Suzanne (RN) and Francesco Insolia and their nephew Robert Thompson;

From Christ Church, Valdosta GA –  Julius Ariail, photographer for the Dominican Development Group (DDG) who was in-country for DDG photographic assignments in five locations (with us on October 3 only);

Riding the bus with Julius Ariail from the mountains of Jarabacoa to join the team at the Las Americas International Airport east of Santo Domingo, Ana Maria Quiroz, who works with the Canadian “House Upon The Rock” Ministry in El Pedregal. She was formerly the cook for the Episcopal Monte de la Transfiguración camp and conference center in El Pedregal / Jarabacoa and has many US friends from the mission team members who have worked there over the past decade. A group of Episcopal friends sponsored her emergency visa last year because of a very large benign pituitary tumor which would have lead to blindness. Our local hospital system took her on as a charity, provided an extensive diagnostic work-up, pituitary brain surgery to remove most the of the tumor, and later followed up with 5 weeks of daily radiation treatments to shrink the remaining tumor. She was here for 6 months with my niece and her husband coordinating her stay. Ana Maria was a real blessing as a member of the team; 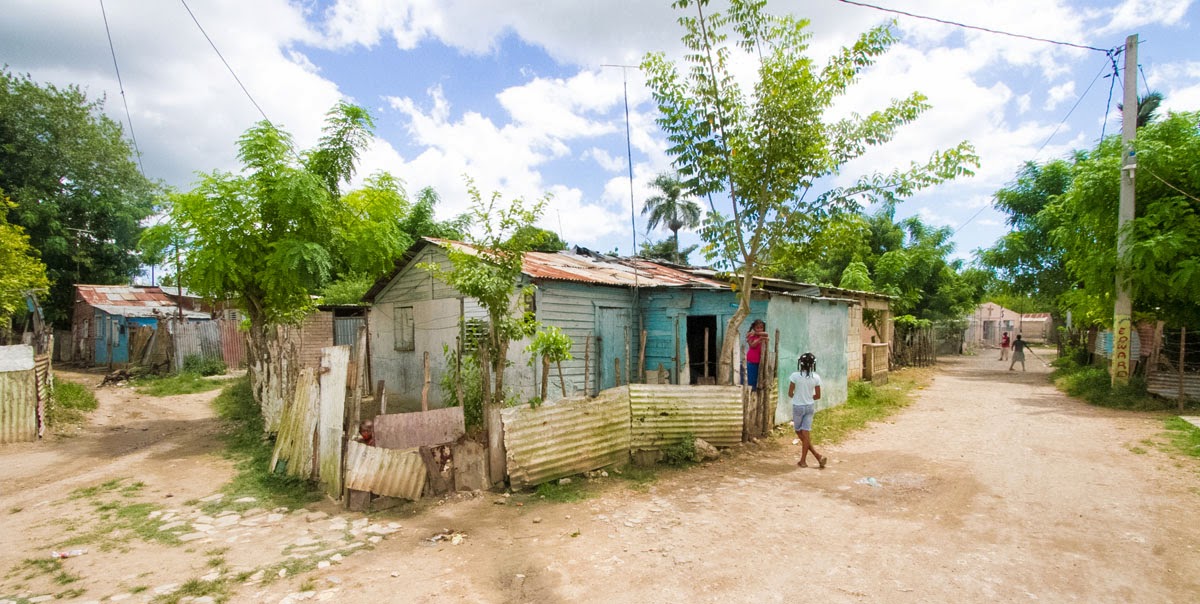 A street scene in the village of Angelina. The church and school buildings are visible at the far end of the street on the right. Click this image to see more photographs from the work of this mission team.

History of This Medical Mission

Our diocese has a long relationship with the Dominican Episcopal Church. In 1999, members of an exploratory team from the Cathedral of St. Luke and St. Paul made the decision to sponsor the seminary education of a young Dominican woman in Santo Domingo. We also participated in the annual diocesan medical mission trips led by registered nurse Cheryl Allen.

In 2007, missionary Deacon Bob Snow coordinated another exploratory trip based on input from the Dominican Bishop, the Rt. Rev. Julio Holguín. The small village of Angelina was by far the neediest area that we encountered. This rural community is located in the middle of sugar cane fields and consists mostly of tin shacks and an abandoned sugar mill which closed in the early 1980’s. We wanted to make a difference, but more importantly, we wanted to get to know the community and assess their perceptions and needs. That fall, two team members returned to meet with the local priest, missionaries, and two SAMS medical missionaries, Doctors Michael and Anita Dohn, to learn more about the community and to plan for the first mission trip.

The following spring, we were joined by the Rev. Andrew O’Dell and church members from St. Matthews, Darlington. The construction team worked with local Dominican workers to paint the church, Santiago Apostal, and also enclosed the area with a chain link fence. We also had a survey team which went into 100 “households” in the community which were identified by the local church leaders. Every family that participated received a large zip-lock bag of toiletries and personal items. They responded to questions about basic sanitation and health concerns. Many did not have running water or electricity and were using latrines. We found a large number of patients with eye damage from constant exposure to the bright sunlight. The results of this survey guided us over the next years as we completed various construction projects and Bible schools in addition to the medical clinics.

The first medical clinic was held in the fall of 2008. We found a large number of people with hypertension and diabetes. We visited the local government-run clinic which has very few resources and a part-time physician, Doctora Miriam Guerra. We explained to her that we weren’t trying to replace her medical care but wanted to assist the patients who could not afford their medicines. She has been very supportive of our efforts and often works with us when she is available, most recently this past October, 2013. In order to responsibly care for patients with these chronic conditions, we hold clinics twice a year and maintain an active list of patients and comprehensive medical records of each visit. If patients are already on a medicine regimen, we don’t change it unless it is not effective. They are given a 3 month supply of their medicine with instructions to return to the clinic or their health care provider in one week with the medicines dispensed in order to keep the local physicians informed. We have now seen more than 150 of these patients on a regular basis, and have seen many of them 11 times in the last 5 years. They are like family to us and we know them well.