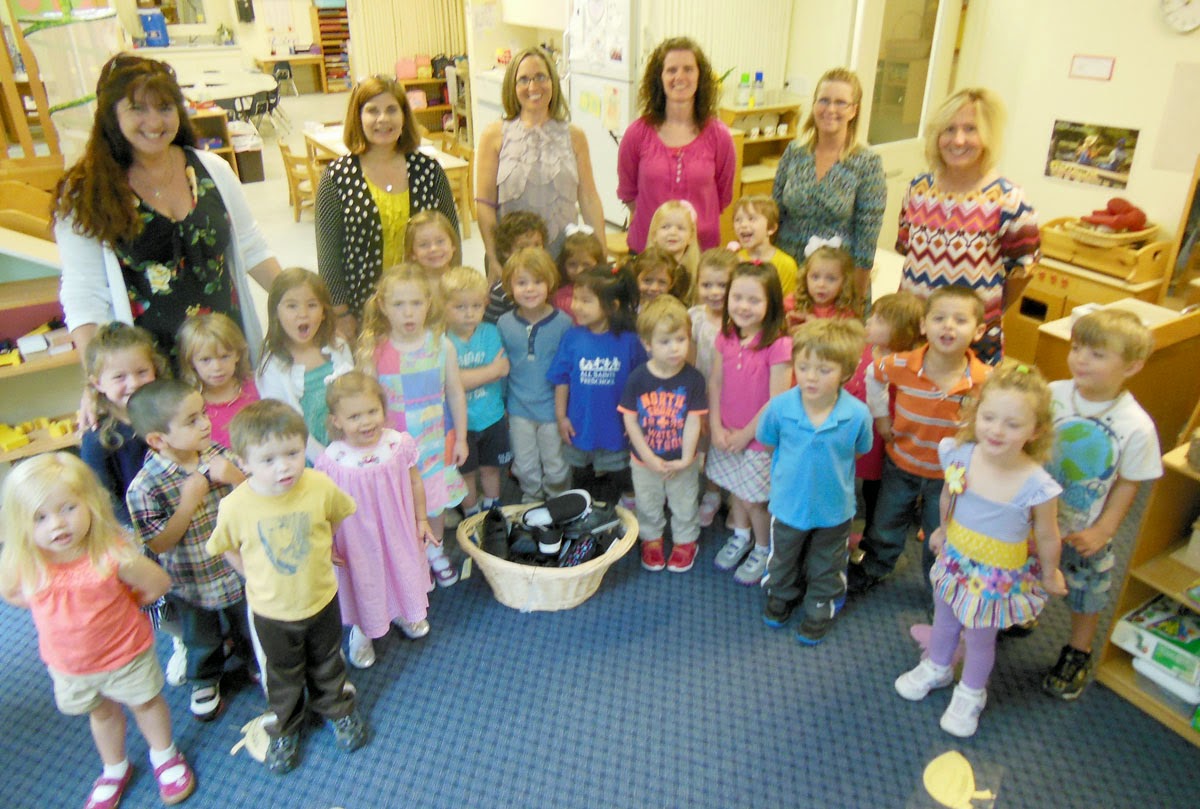 All Saints Preschool faculty and students collected fifteen pairs of new shoes for donation to needy students at La Redención School in the city of Barahona in the Dominican Republic. Pictured with the students are teachers Rebecca Martel, Nan Thompson (PreSchool Director), Connie Gregory, Norann Lewis, Bonnie Fick, and Beth Nizolek. Not photographed was Patty Massey. Click this image to see more photographs from this ministry. 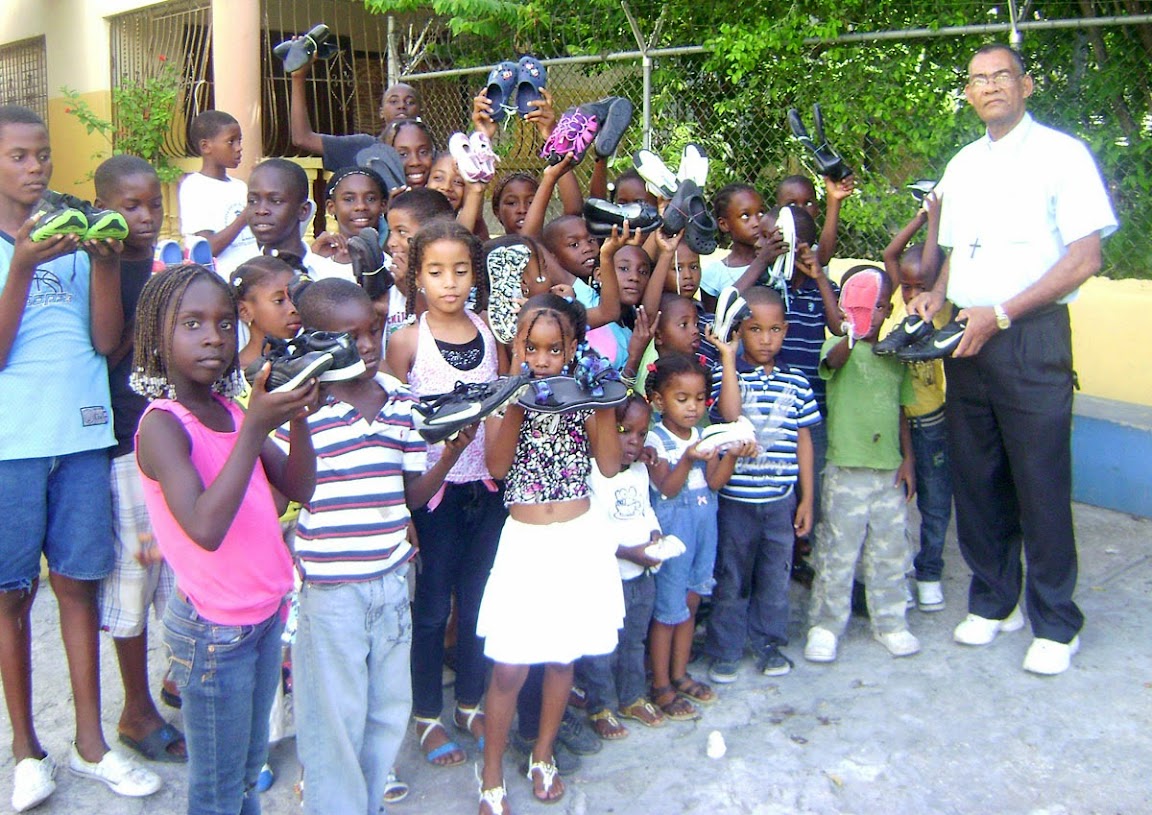 At far right: The Rev. Francisco Alfredo Romero and some of the children of the two Episcopal churches in Barahona. At the time of this photograph, Fr. Alfredo was the vicar of La Redención and its Episcopal school. Click this image to see more photographs from this ministry.

Photographs from this ministry project are being posted in an online album here: https://picasaweb.google.com/dominicandevelopmentgroup/20140118HappyFeetShoeMinistry 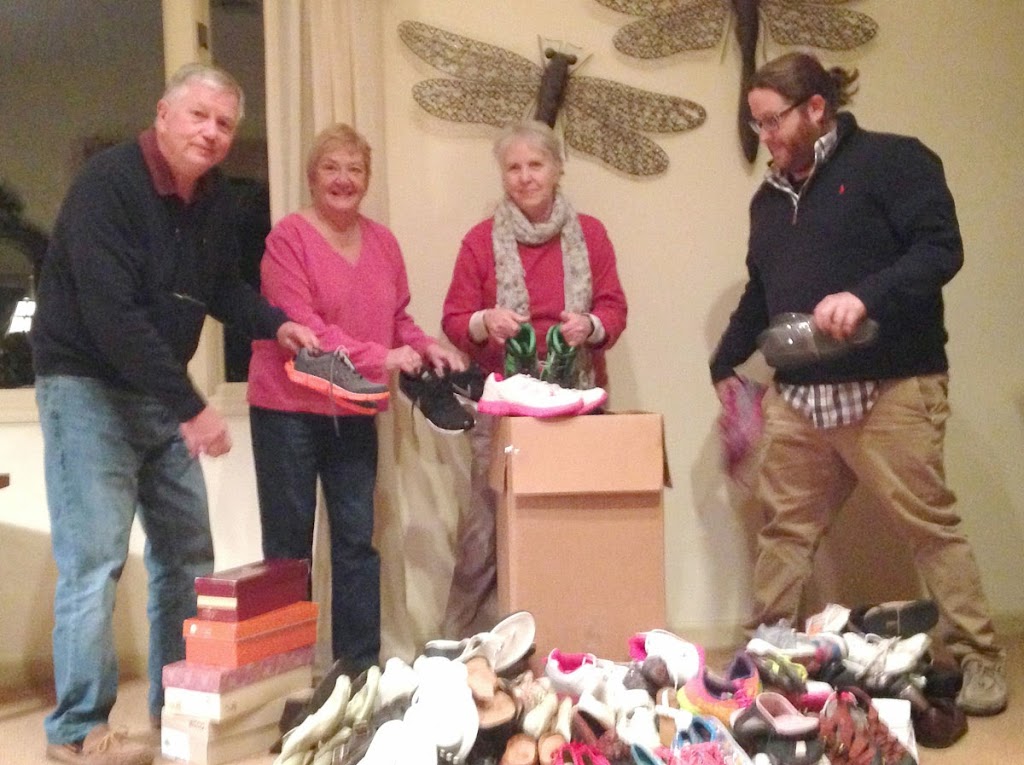 Packing up the donated shoes for shipment to the Episcopal Diocese of the Dominican Republic. From left: Steve Tabor, Cheryl Clephane, Judy Cote, and Luke Cleveland. Click this image to see more photographs from this ministry.

The project began in June 2012, when Karen Carroll, a full-time missionary and mission team coordinator on the staff of the Episcopal Diocese of the Dominican Republic, described the desperate and continuing need for substantial shoes for the Dominican people. Karen said that shoes in the Dominican Republic are often very expensive, but may also be of very poor quality. In addition, because of the lack of pavement in many places, shoes do not last as nearly as long as in the United States. Members of a mission team from All Saints visited a Payless shoe store in Santo Domingo during that trip, and found that a pair of children’s school shoes cost $RD1000 (approximately $US25) and were definitely substandard.

In the Dominican Republic, all children are required to wear uniforms to school. Part of the uniform is black closed-toe shoes. Karen said that many families send children to school on alternating days because siblings must share the same pair of shoes. A friend of mission team members who travels on business to more remote areas of the Dominican Republic mentioned that he has seen many tobacco and sugar cane workers with cardboard secured to their feet with tape in lieu of shoes.

During the active games portion of Vacation Bible School last summer, the team members observed that several children removed their shoes before participating in the games. The team’s local translator told them that the children’s mothers instruct them to take off their shoes if running is involved, so as not to damage the shoes. The children were running in the churchyard on crumbled concrete. 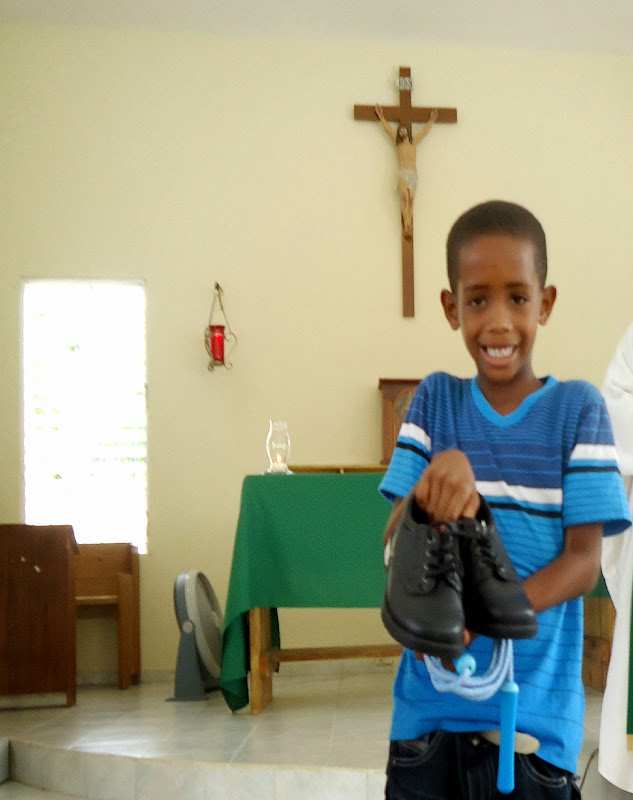 A child in a Dominican Episcopal school with his donated shoes. Click this image to see more photographs from this ministry.

They ship each box via UPS at an average charge of $US0.65/pound to Agape Flights in Venice, Florida, an aviation service that specializes in delivering mail, cargo, and humanitarian aid to missionary partners in the Caribbean area. Agape charges the Episcopal Diocese of the Dominican Republic $US1.75/pound to deliver cargo to Las Américas International Airport east of Santo Domingo, and the Happy Feet ministry reimburses those shipping costs to the Dominican diocese. The total shipping cost is approximately $US2.40/pound. Once the shoe shipments arrive at the Las Américas airport, they are met by a representative of the Diocese of the Dominican Republic, walked through Dominican customs, and then transported to the diocesan office for eventual distribution to children and adults through the clergy at individual Dominican Episcopal churches and schools. Usually there are no Dominican customs charges for used shoes and small amounts of new shoes; but if customs charges do occur, the “Happy Feet” ministry will reimburse those costs to the Dominican diocesan office.

Please note that parcel shipments should not be sent to Agape Flights for eventual delivery to the Dominican diocesan office without prior coordination with Karen Carroll. All Agape Flight shipment costs are initially billed to Karen’s office and not to the sender, so reimbursement plans for those Agape shipping costs need to be worked out with Karen before the packages arrive at the Agape office in Venice, Florida. Those reimbursement funds can be transferred securely to the treasurer of the Diocese of the Dominican Republic through the international banking facilities of the Dominican Development Group, an organization within The Episcopal Church dedicated to the support of the Dominican diocese, including coordinating the work of mission teams involved in complex, long-term projects. 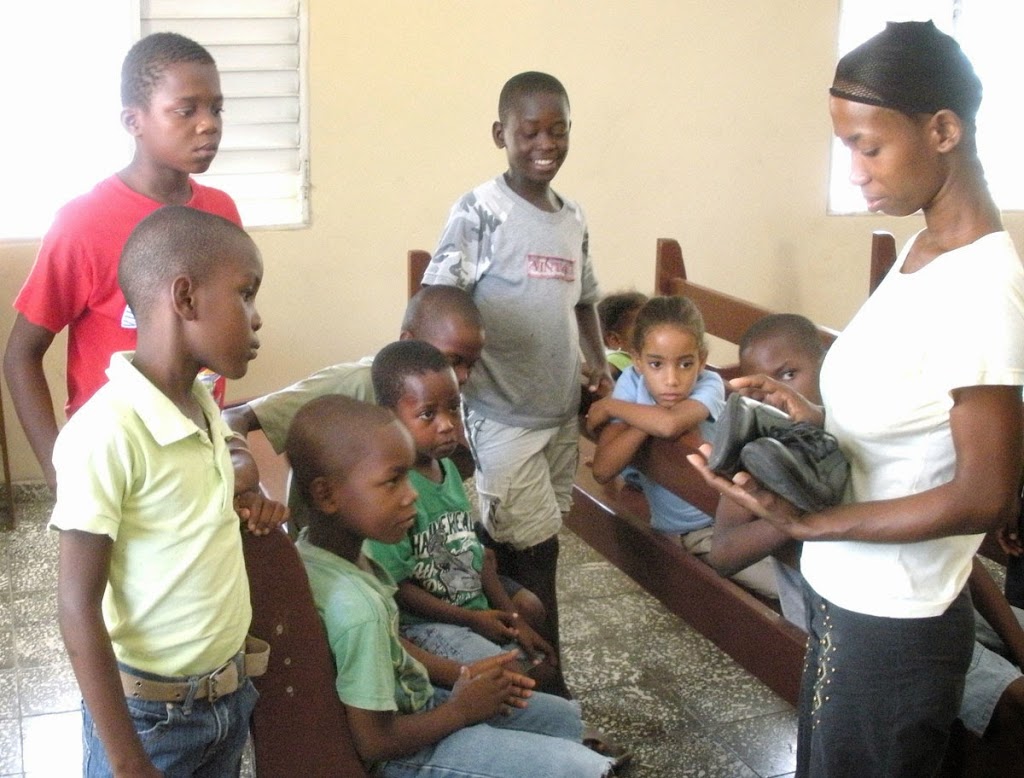 Donated shoes being distributed in an Episcopal church in the Dominican Republic. Click this image to see more photographs from this ministry.

To date, this ministry has provided approximately 1,500 pairs of shoes for the Dominican Republic. Most recently, three local Episcopalians delivered shoes in conjunction with a mission trip there. Bonnie and John Gruetzmacher and Loretta Tabor, members of All Saints, carried 68 pairs of shoes in their luggage, while Judy Alling transported 20 pairs from St. Mark’s. Included in this entire group of shoes were 15 pairs of new black school shoes that had been collected by the students of the All Saints Preschool. 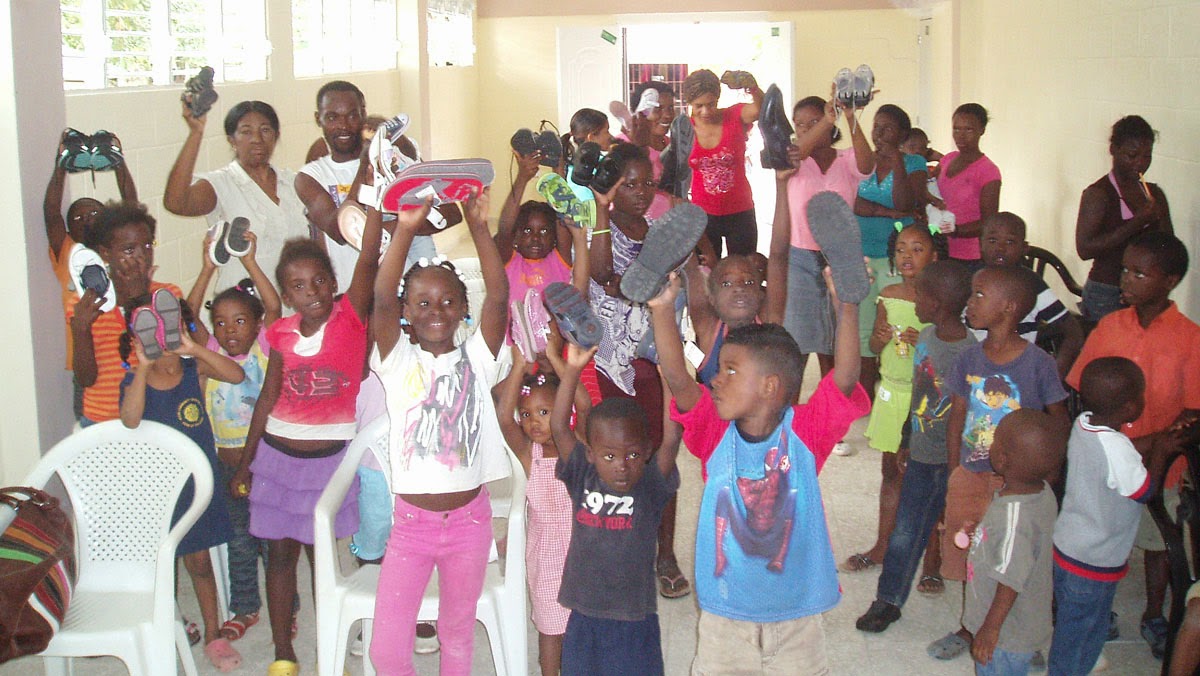 Children with their donated shoes in Iglesia San Pedro in Los Conucos, a village west of the city of San Pedro de Macorís. Click this image to see more photographs from this ministry. 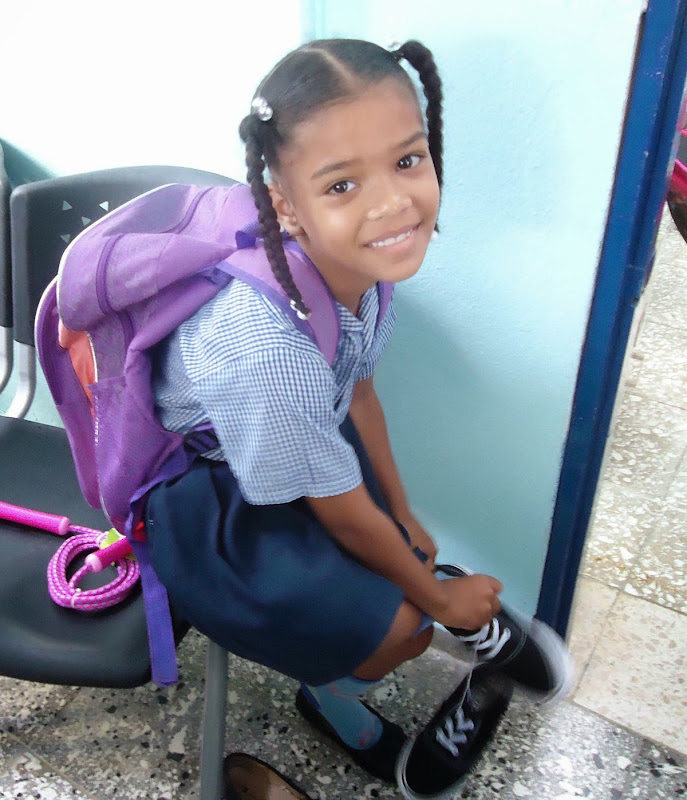 A child in a Dominican Episcopal school with her donated shoes. Click this image to see more photographs from this ministry.

In addition to the shoes that were delivered, there were also pictures that the children of the Preschool had drawn. They were given to the Rev. Francisco Alfredo Romero, who at the time was the vicar of La Redención, a mission church in Barahona in the southwestern part of the Dominican Republic. Father Alfredo exchanged these pictures for ones that the students of his school had drawn for the All Saints Preschool students. “The students of La Redención and All Saints have an on-going informal exchange program, where they correspond with each other and send photos, pictures, and handcrafted items from time to time,” according to Nan Thompson, All Saints Preschool Director.

Additional shoes are currently being collected for a future shipment. According to Loretta Tabor, “These are people who really live the way Christ intended us to live; they share everything.” She has further commented, “What we can do really is only a drop in the bucket, but we believe that it is a blessing both to us and to the Dominican children to be able to add that drop as often as we can.”

For information about how you can begin a Dominican Republic Shoe Ministry at your church, contact Loretta and Steve Tabor at (843) 987-0198, email stevetabor@embarqmail.com; or Karen Carroll at email drequipos@gmail.com.