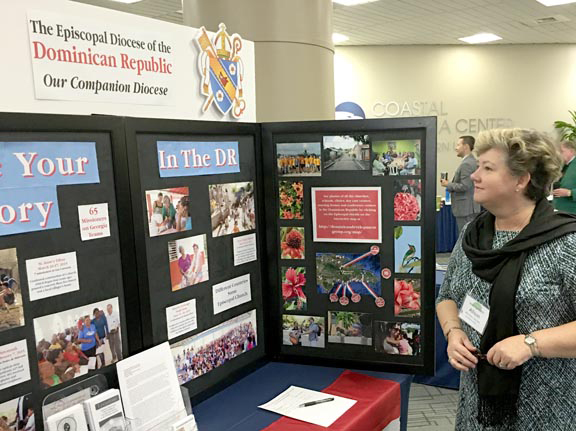 Alison Clarkson, a veteran DR missioner from the Southeastern Convocation, at the Companion Diocese exhibit table at the diocesan convention in Savannah in November, 2015. 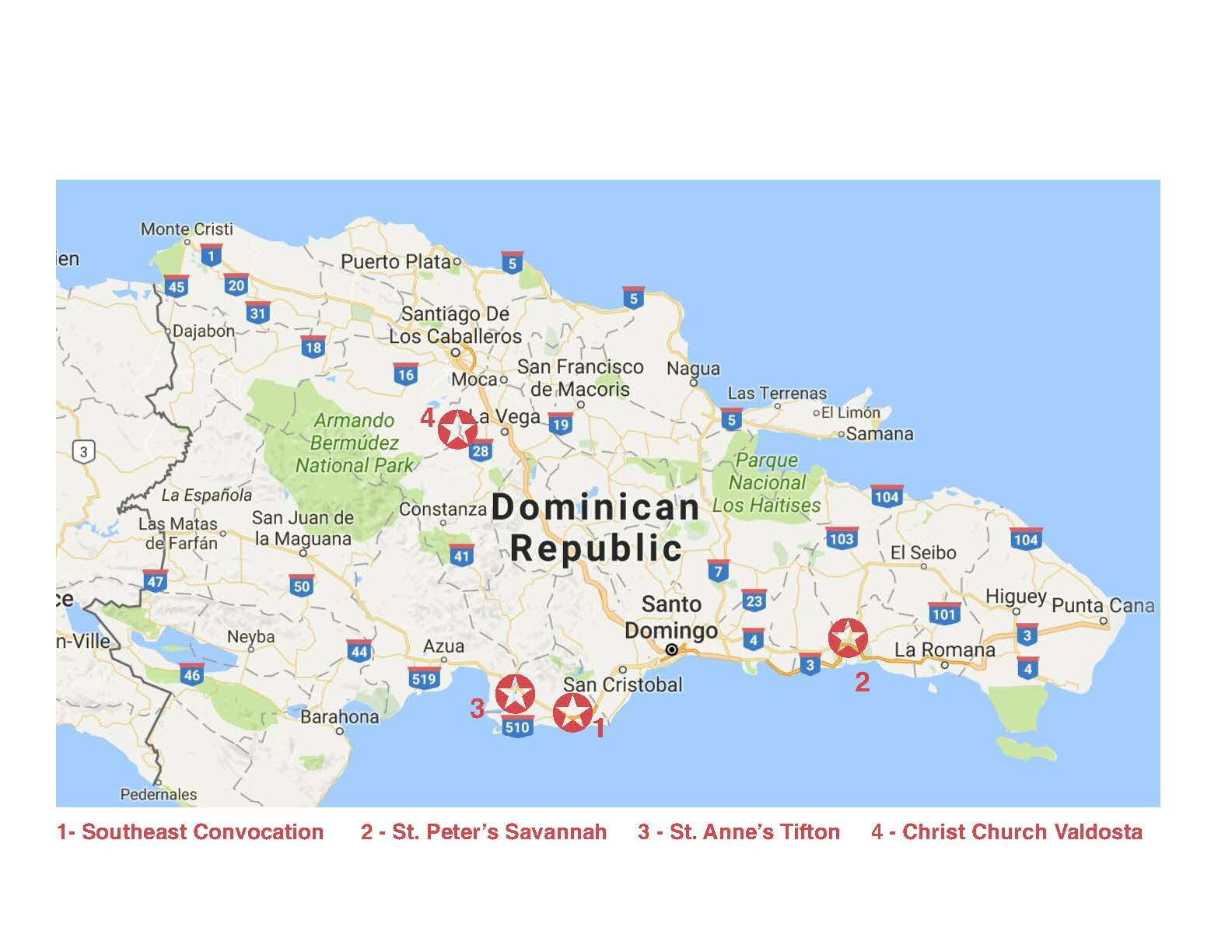 During 2016, four mission teams from the Diocese of Georgia worked alongside Episcopal congregations in four separate locations in our Companion Diocese of the Dominican Republic. This relationship between our two dioceses extends back to our first mission trip to the Dominican Republic in 2001, and remains a vibrant part of our diocesan ministries, both home and abroad.

The Southeastern Convocation team in the Santo Domingo airport.

The Southeastern Convocation sponsored a team of nine missioners who worked in El Carretón from January 18-26, 2016. This trip marked the fifth consecutive year the team has worked in this community. Projects included checking on the installation of a water system to provide water for the plumbing in the school, repair work in the Episcopal school building, light construction in the community, and classes for the school children about different cultures and their customs. Team members included Ava Bokker, Ann Franklin, Dr. Lela Lewis, Patsy Lloyd, Jacob Nickodem, Mary Jo Nickodem, Jim McGovern, the Rev. Dee Shaffer, and Rena Simpson.

The St. Anne's missioners with members of the Las Carreras community in front of the church building under construction.

St. Anne’s Episcopal Church (Tifton) sponsored a team of five missioners who worked in Las Carreras from April 1-9, 2016, continuing construction work on the church building for the congregation of Espíritu Santo in that village. This was the fifth consecutive year that the team has worked in this community. The team plastered and painted the interior of the church building during their trip. Although the building has not yet been completed, worship services are now being held inside the structure. Team members included Stacey Beckham, Lindsey Duncan, the Rev. Lonnie Lacy, Rich McDonald, and Troy Spicer.

The missioners from Christ Church (Valdosta) with their hosts at the Episcopal camp and conference center in El Pedregal.

Christ Episcopal Church (Valdosta) sponsored a team of eight missioners who worked in the Dominican Episcopal camp and conference center in El Pedregal from May 9-16, 2016. This is the twelfth consecutive year that the team has worked in this community in a relationship that began with the first trip in 2001. The team installed sixteen ceiling fans in an Episcopal school and in one of the large meeting rooms at the conference center, taught environmental classes to middle-school students, repainted a large swing set, repainted and refurbished a volleyball court, made bookcases, held a rabies vaccination clinic for 50 dogs and cats, and sponsored a “splash party” for 150 children from the nearby village. Team members included Julius Ariail, Julia Ariail, the Rev. Deacon Leeann Culbreath, Phyllis Hiers, Dr. Meg Hiers, Dr. Bill Querin, Fred Richter, and Paul Stevenson.

The ordination and consecration of the Rt. Rev. Moisés Quezada Mota as Bishop Coadjutor of the Diocese of the Dominican Republic in Santo Domingo on Febrary 13, 2016. Presiding Bishop Michael Curry served as the chief consecrator. 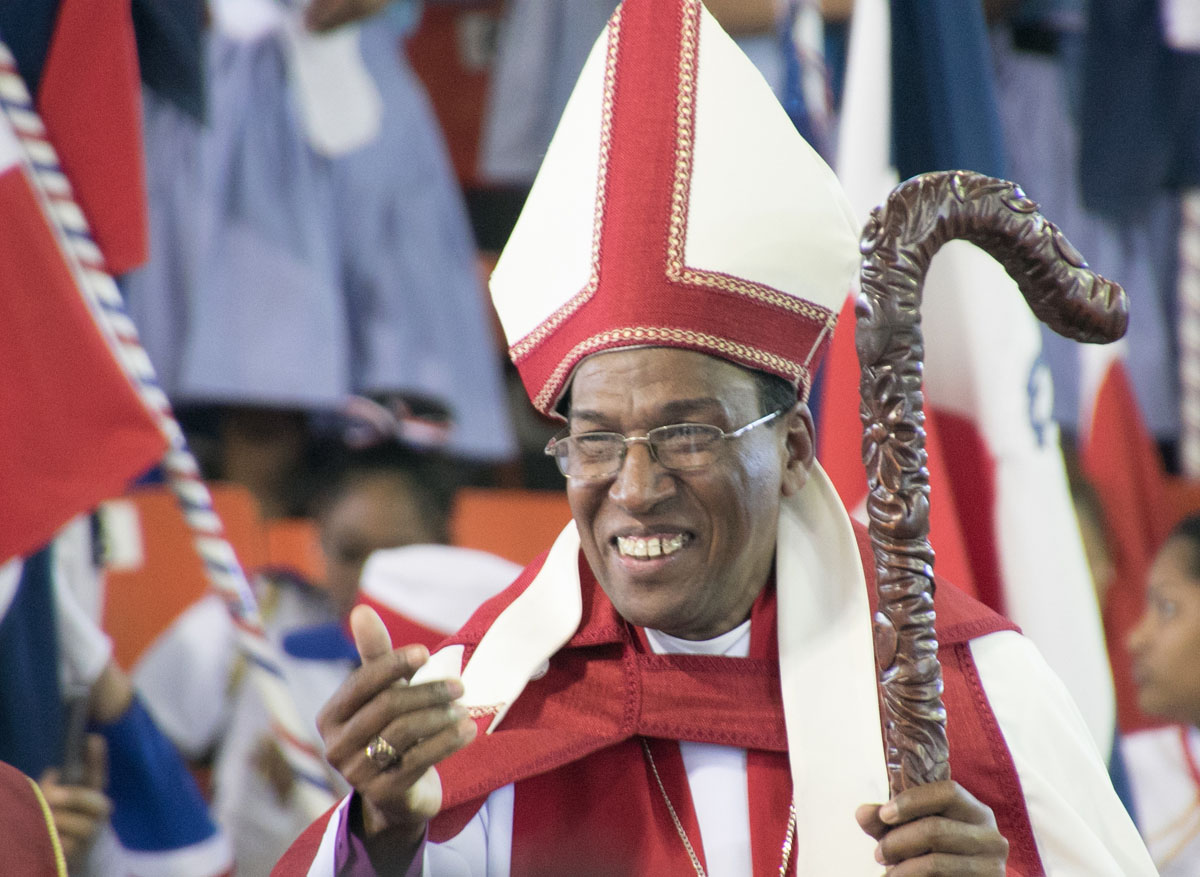 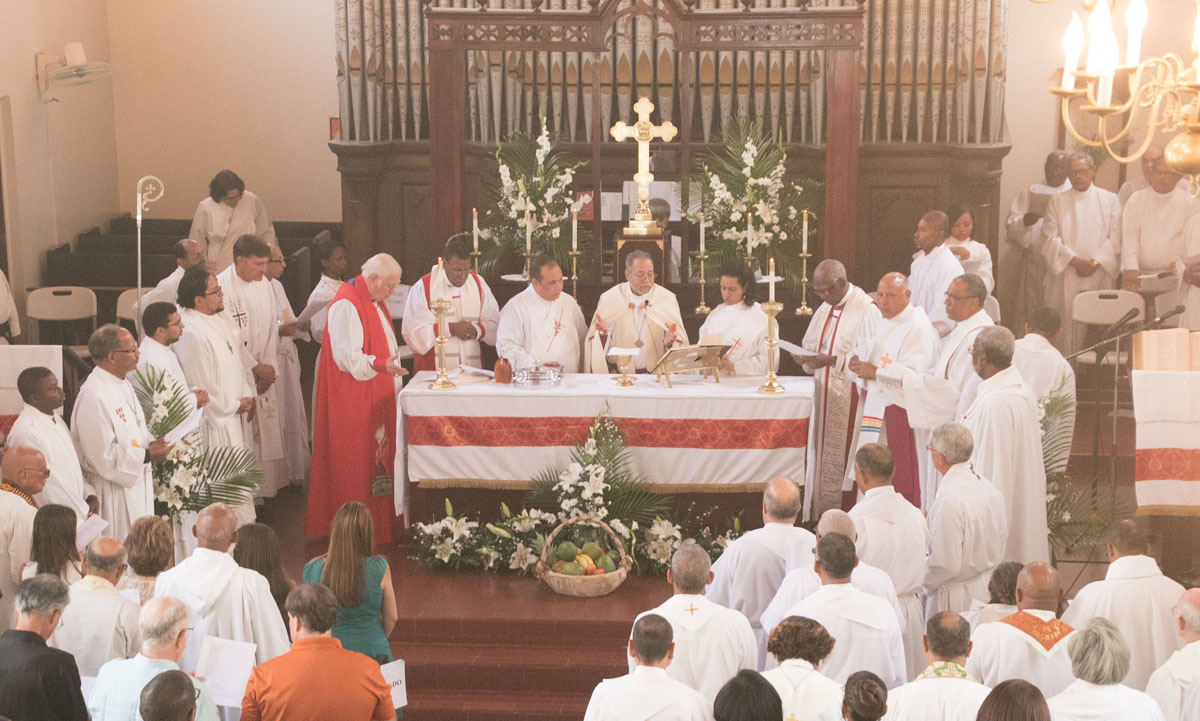 The celebration of the 25th anniversary of Bishop Holguín’s episcopate was held in Epiphany Cathedral in Santo Domingo on August 20, 2016. 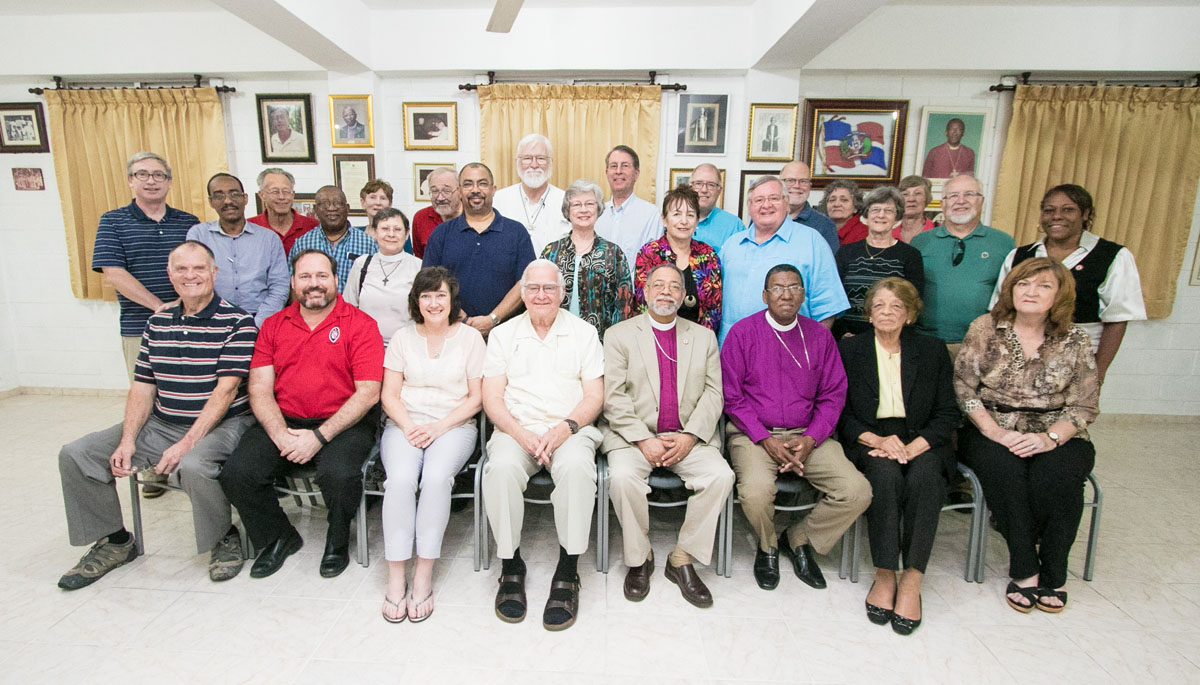 The members of the Board of Directors of the Dominican Development Group and visitors at their meetingv in Santo Domingo on Febuary 15, 2016. Julius and Julia Ariail (center, 2nd and 3rd rows) represent Bishop Benhase on this board. Clergy and laity from twelve dioceses of The Episcopal Church are present in this photograph.

Our diocesan budget allocated $10,000 to support the work of the Dominican Development Group, which coordinates the work of the approximately fifty mission teams that come from the United States each year to work alongside Episcopal congregations in the Dominican Republic, supports the development of the facilities and the programs of the Diocese of the Dominican Republic, and raises funds for the endowment of the Diocese. The proceeds from this endowment will eventually lead to the Diocese’s financial independence, the first in Province IX to attain this status.

For more information on the work of the Companion Diocese Commission, check our webpage here: http://georgia.anglican.org/?page_id=19. 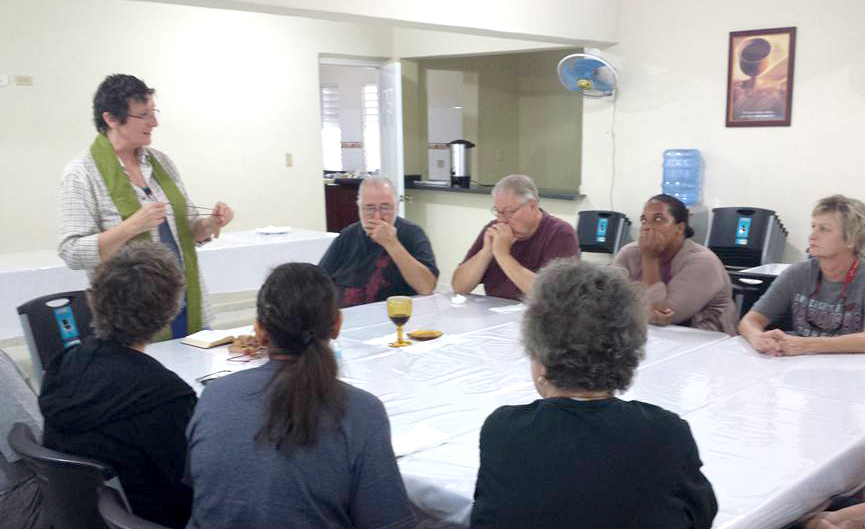 Southeastern Convocation
The Rev. Dee Shaffer distributes crosses to her fellow missioners after a Eucharist service in the Dominican conference center in Santana Baní. 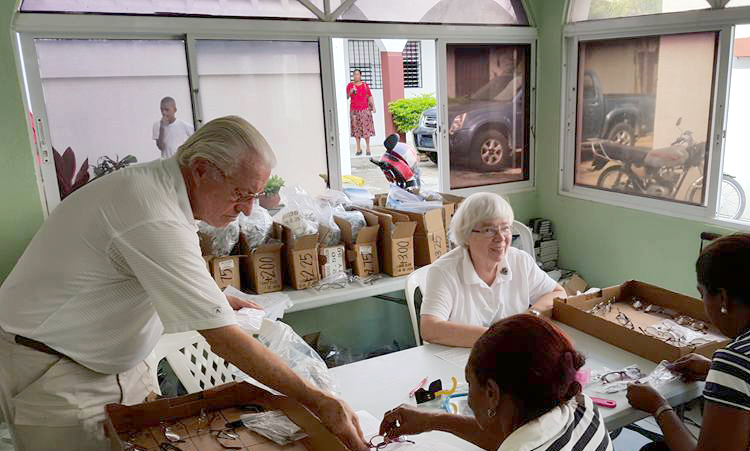 St. Anne’s (Tifton)
The Rev. Lonnie Lacy leads a worship service in the building being constructed for the congregation of Iglesia Episcopal Espíritu Santo (Holy Spirit Episcopal Church) in the village of Las Carreras. 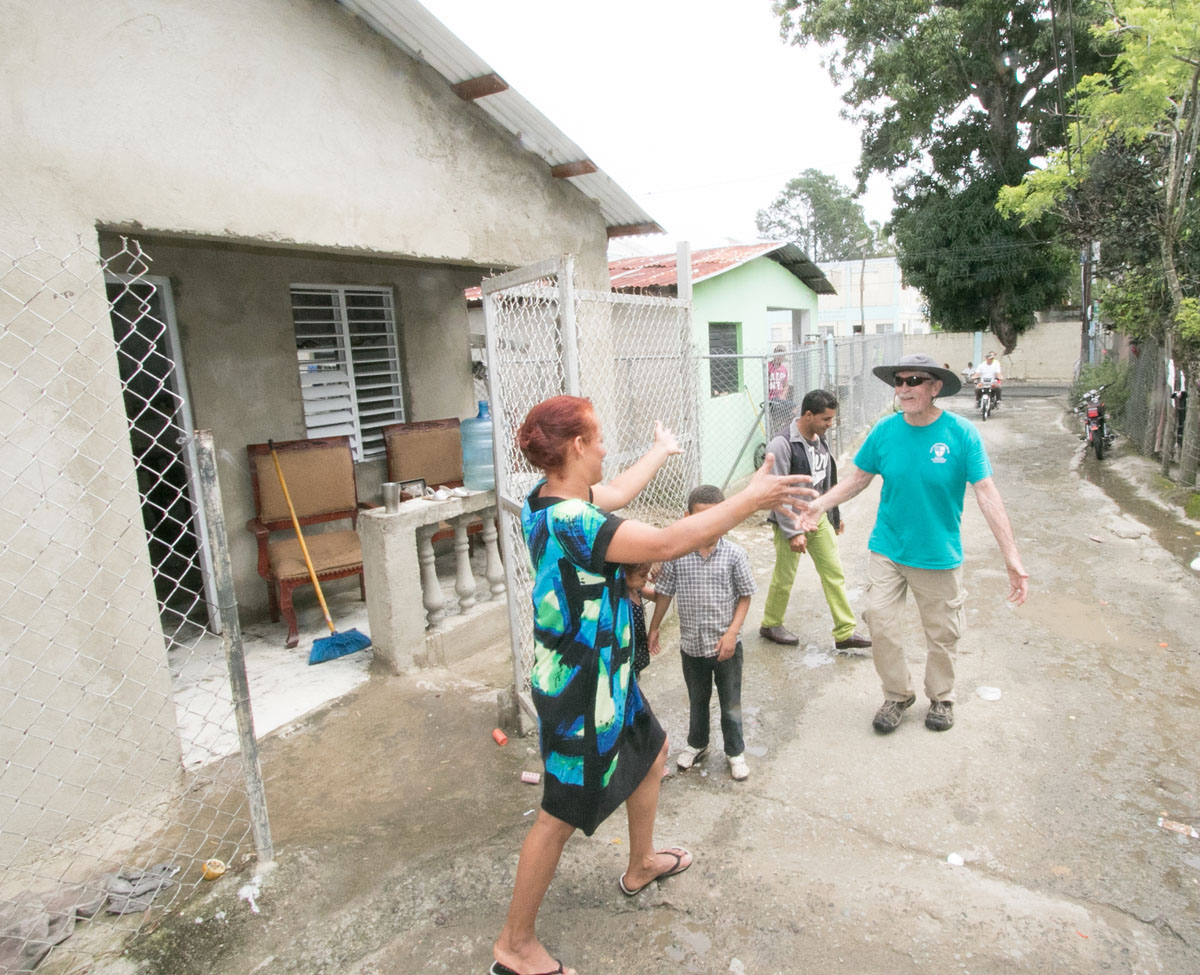 Christ Church (Valdosta)
Missioner Fred Richter, a veteran of DR mission work dating back to 2001, greets a villager in El Pedregal. In 2014 Fred and the Christ Church team, assisted by a partner team from Nebraska, built this woman’s house (seen on the left of this photograph).